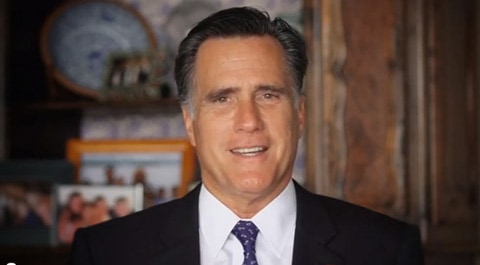 Here's Mitt Romney's prerecorded video to attendees of the Values Voter Summit over the weekend sponsored by Tony Perkins and his hate group Family Research Council.

We will uphold the sanctity of life, not abandon or ignore it. And we will defend marriage, not try to redefine it. We need a President who understands that we will not have a strong economy unless we have strong communities and strong families. This isn’t conjecture or some quaint belief, it’s evidenced by a Brookings Institution study that Rick Santorum brought to my attention some time ago. For those who graduate from high school, get a full-time job, and wait until they’re 21 until they marry and then have their first child, the probability that they will be poor is 2 percent, but if those things are absent, the probability of becoming poor is 76 percent. In short, culture matters, and as President, I’ll protect our culture and preserve the values of hard work, personal responsibility, family, and faith.