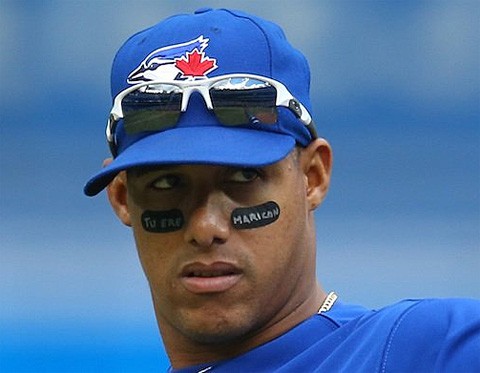 Toronto Blue Jays shortstop Yunel Escobar has some explaining to do after taking the field on Saturday with an anti-gay slur printed in his eye black, Yahoo! Sports reports:

…there is some reason to reserve judgment. Former Jays pitcher Dirk Hayhurst believes it to be a clubhouse prank — which basically just means there's a different source for such blatant homophobia. There's also the fact that Escobar sometimes wears eye black with funny sayings, so this would be out of character. (These, for instance, read "CHILLING")

Here's the thing, though: Eye black now comes in a strip or sticker form and players can write motivational sayings (think Tim Tebow) before applying themselves. There would be no need for Escobar to ask another player to write on his face. The handwriting in the "CHILLING" picture also matches the handwriting from the photo above.