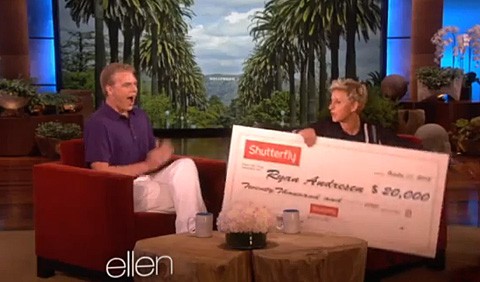 18-year-old Ryan Andresen, the Boy Scout who completed the requirements to earning an Eagle Scout award (including a "tolerance wall" for victims of bullying) and was then denied the award because he is gay, appeared on Ellen this afternoon. He told his story, introduced his amazing mom, and received a nice check to put toward his college education. 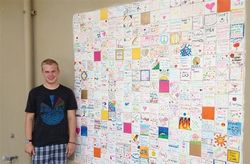 “We have been and will always be open and affirming, and will never turn our backs on a child or adult that seeks to embrace the core values found at the heart of Scouting,” Pack 4 Cubmaster Tony Gangi said. The pack’s committee, which has 11 members, voted unanimously to reject the policy last month. This week, the committee issued its own “statement of inclusion,” saying the benefits of Scouting “should be available to all children and their families, regardless of their sexual orientation.”

More than 350,000 people have signed a change.org petition started by Ryan's mom to allow her son to achieve the rank he worked so hard for. Those signatures join the more than 330,000 asking the BSA to reinstate Ohio mom Jennifer Tyrrell, who was kicked out as den leader of her son's scout troop because she is gay.