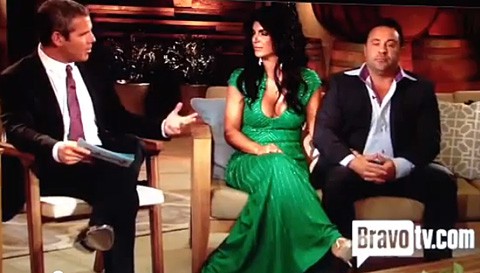 Cohen asked Giudice aboutt remarks he made that one of the show's gay castmembers had a "loose butthole".

"Everyone laughed. I mean, that was funny," interjected Teresa.

"I mean even gay guys tell me it was funny," said Joe.

"Growing up, we always used the word… we call each other, faggot, homo or whatever, that was just our words growing up. doesn't mean anything. We were friends. We call each other names all the time, it doesn't mean we're gay. We just would use that word for whatever reason, that just was in our vocabulary… It was just a word that everybody used. Now, I don't use the word anymore because it's not appropriate and people don't want to hear that, so I don't use it."

Previous Post: « Romney Blimp Crash-Lands in Blue Florida County: VIDEO
Next Post: What Would You Do if Your Girl Wanted to be Spider-Man, or Your Boy a Princess for Halloween? – VIDEO »