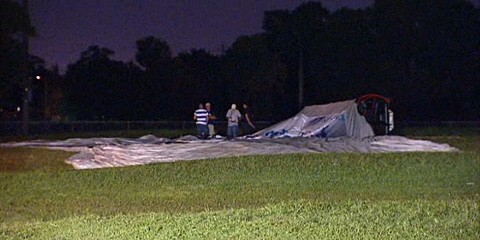 No one was injured when the thermal airship, which had a photo of the GOP presidential hopeful and the slogan "America Needs Romney," went down in the 3800 block of Southwest 92nd Avenue around 7:30 p.m., Davie Police spokesman Capt. Dale Engle said.

The airship had been traveling from Boca Raton, the site of Monday's third and final debate between Romney and President Barack Obama, to North Perry Airport in Pembroke Pines.

One voter told the news, "I thought, boy, Mitt Romney really wants us to vote for him."

An Obama supporter joked, "Yeah I brought it down with a rock…no."