ROMNEY: I think it’s interesting that the president just said something which is on the day after the attack he went in the Rose Garden and said that this was an act of terror.

OBAMA: That’s what I said. 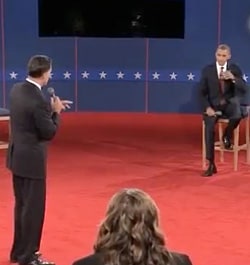 ROMNEY: You said in the Rose Garden the day after the attack it was an act of terror? It was not a spontaneous demonstration? Is that what you’re saying?

ROMNEY: I want to make sure we get that for the record because it took the president 14 days before he called the attack in Benghazi an act of terror.

OBAMA: Get the transcript.

CROWLEY: He did in fact sir, so let me call it an act of terror and —

OBAMA: Can you say that a little louder Candy?

CROWLEY: He did call it an act of terror. It did as well two weeks or so for the whole idea of there being a riot out there about this tape to come out, you’re correct about that.

OBAMA: "No acts of terror will ever shake the resolve of this great nation, alter that character, or eclipse the light of the values that we stand for. Today we mourn four more Americans who represent the very best of the United States of America. We will not waver in our commitment to see that justice is done for this terrible act. And make no mistake, justice will be done."