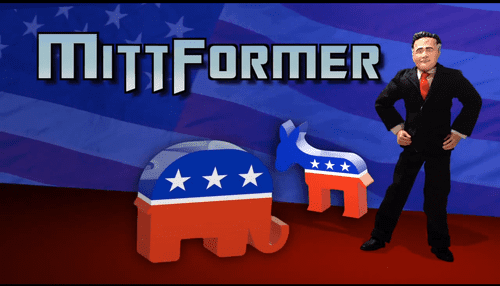 There is no doubt Mitt Romney got a substantial bounce from the debate last week. Just how big it was though is up for debate. Romney has reached the level of fame in which you get your own action figure. And just like him it bends in whatever direction will get him the most votes.

Democrat Chris Murphy and Republican Linda McMahon held a debate last
night in Connecticut where they are both running for Senate. Check out this moment in which McMahon thinks America has a law protecting same-sex marriage. Hey we can all dream, right?

Oprah might not be on television every weekday anymore, but she still gets the interviews she wants. She sat down with KONY 2012 co-founder Jason Russell and asked him, among other things, if he's gay.

Someone who is definitely gay (and proud of it!) is Sam Champion. He talked about his engagement on today's Good Morning America.

Great news out of Washington State where a marriage equality referendum leads by 15 points in the latest poll! And gross news out of Utah where a Mormon leader recently warned against the danger of children being raised in gay families. He's against bullying though! Uh. Ok.

Check out this powerful YouTube video from a proud gay man who was forced to endure 5 years of "gay cure" therapy!
Really inspirational. The LGBT community in Austin staged a march
yesterday in response to the anti-gay assault during Pride Weekend in
the Texas capital. Police have also reportedly released surveillance video of said attacks.

Take a look at the Ohio State marching band showing off their impressive skills by doing this crazy tribute to video games! Also which of these men has the goods to represent the U.S. in the "Mr. Gay World" competition?