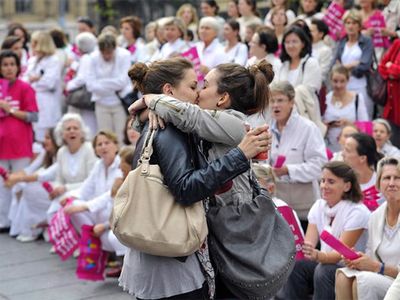 PHOTO OF THE DAY: Kiss shocks anti-gay protesters in France.

For weeks Donald Trump has been touting the release of an "October Surprise" that might just take down the Obama Campaign. Well in a video released today Trump fails to surprise us by showing that he is as boring and irrelevant as ever. Yesterday the Log Cabin Republicans officially endorsed Mitt Romney and today reports of back room deals between the Governor and the Log Cabiners got hashed out. The LCR denies reports that have stated the group supported the Republican in exchange for his support of ENDA. Maybe they just gave him some tanning advice?

Both Jon Stewart and Rachel Maddow went after Romney for agreeing with Obama's foreign policy during the debate on Monday and for his lack of interest in foreign policy at all.

In other news, Romney-endorsed Senate candidate Richard Mourdock believes that pregnancies caused by rape are "something God intended". Nice company you keep Mitt. 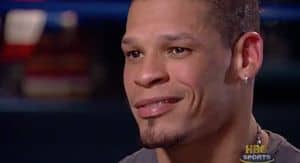 One gay man wants to thank Mitt Romney and other Republicans. In a sarcastic way of course. Does he also want to thank a Minnesota spokesman for "traditional marriage" who recently likened gays to Hitler? I'm guessing not. Canadian comedian Jon Lajoie also opposes same-sex marriage. He just can't figure out why.

Anderson Cooper sat down with Ryan Andresen, the Boy Scout who was denied Eagle Scout rank because he was gay. Check out the interview here. Also openly gay boxer Orlando Cruz gives his first interview since coming out.

Marc Jacobs released a short film this week to promote his new line of jewelry. Who really cares about the product, the ad features tons of shirtless dudes. Also check out this pretend arrest/real surprise scholarship announcement from a Massachusetts high school.

Previous Post: « ‘How to Survive a Plague’, ACT UP, and Marriage Equality Activism
Next Post: Ky. Men Acquitted In Anti-Gay Hate Crime Case »