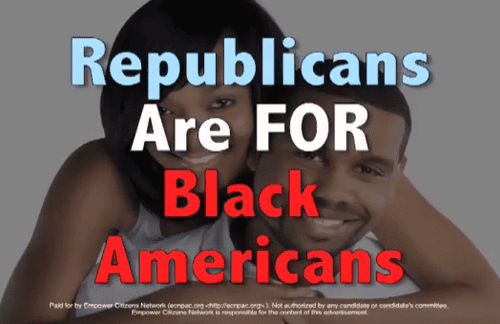 If you want to know what craven vote pandering looks like, look no further than this ad put out by the conservative super PAC Empower Citizens Network, which claims a “major revelation” in “news” that Republicans are for black Americans.

The ad then cites Republican Abraham Lincoln, a president from a different time and a man who has been dead for 147 years, as their character witness. It’s an astonishing piece of work that’s currently airing in Ohio.

Hunter at Daily Kos had this to say about this shameless display:

So the Republicans are now the party of civil rights, which is no doubt why they’ve been going on for decade after decade about states’ rights and southern heritage and southern strategies and how the Confederate flag is great and putting up billboards warning minorities not to vote and … you know what? I don’t even have the energy. And from the looks of the ad, neither do they.

If the GOP is so keen on using Lincoln and his anti-slavery politics as their platform, perhaps they should also start touting his advocacy of a progressive income tax?