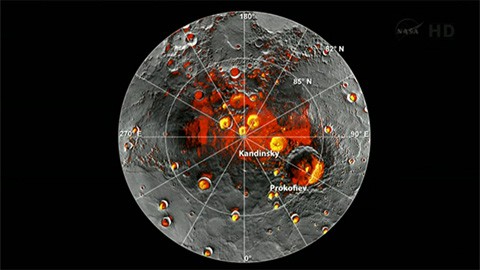 Mercury, the planet closet to the sun, has plentiful amounts of water ice, NASA reports:

The findings from the Messenger spacecraft orbiting the planet cap the decades-long search for water on the second-hottest planet in the solar system and may help scientists better understand the origins of the molecular building blocks for life on Earth.

The new research "doesn't mean we have life on Mercury," said UCLA planetary scientist David Paige, lead author of one of three papers published Thursday by the journal Science. "But it is relevant for the question of life in the solar system in general."

As much as 1.1 trillion tons of ice could lie on or just beneath Mercury's surface in the nooks and crannies of craters that never see sunlight, according to scientists working on the Messenger mission. Much of that ice may be protected by a dark layer of carbon-rich organic material several inches thick, they said.