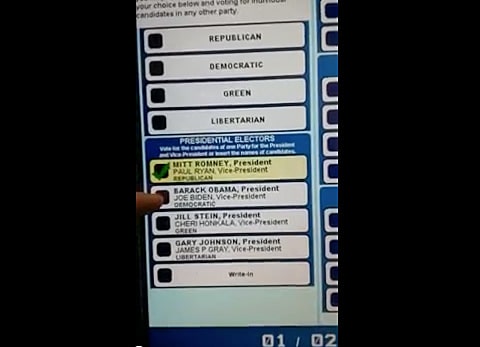 This morning I posted a YouTube video which showed a Pennsylvania voting machine recording a vote for Mitt Romney which was intended for Barack Obama.

Mother Jones reports that the machine was taken offline, "recalibrated", and put back in service:

MSNBC's Zachary Roth reported that a Pennsylvania electronic voting machine was taken out of service after the video went up, but Mathew Keeler, a spokesman for the Pennsylvania Department of State, says the machine is back online again—though he couldn't confirm whether that rejiggered terminal was the same machine featured in the video.

"There was a single complaint, so they recalibrated the machine, did a test run, and put it back online. We've had no complaints since then," Keeler says. While he couldn't say for certain that this was the machine that "centralpavoter" attempted to use, he added that "we believe they are probably connected."