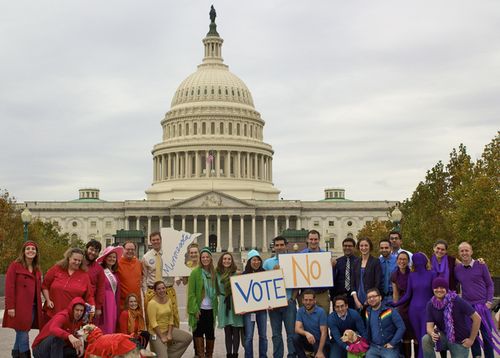 PHOTO OF THE DAY: Senator Al Franken's staff dressed up as a Halloween rainbow.

With just a few days until the election, some anti-Obama enthusiasts are pulling out all the stops. Case in point a bishop from Peoria, Illinois who is forcing his priests to read an anti-Obama letter at Sunday services — maintaining that perfect mix of Church and State. Mitt Romney doesn't need people to write letters to make him look terrible. Mitt does that on his own. Check out what he said about a state supreme court ruling in favor of gay marriage back in 2004.

New York Times election blogger Nate Silver continues to exude confidence about an Obama win on Tuesday. Today he bet Joe Scarborough a ton of money that Obama will be re-elected. Also in the pro-Obama camp is New York Mayor Michael Bloomberg. Today he officially came out with his endorsement of the President.

In the New York Times today there is a piece about 'converted' 'ex-gays' who are upset about the "hate" they receive for turning straight. Well maybe if the very notion of needing therapy to stop being gay wasn't so offensive they wouldn't be ostracized.

A group of stories involving anti-gay sentiment today. Speaking of so-called 'ex-gays', a former leader of the converted is warning of "homofascism". You may remember Andrew Shirvell from when he was harassing the University of Michigan's openly gay student body President. Well he is now a recipient of unemployment. A school in Ohio has really set itself up for a lawsuit after forcing some kids to remove shirts that supported gay rights. Also, Massachusetts Senate Candidate Sandi Martinez believes that the 'lifestyle' of homosexuals is sad.

The clean up continues from Sandy. With power (hopefully) being restored to Manhattan this weekend, food and water stations have been set up to help residents get the essentials while they are still in the dark. Also very limited subway service has been restored today.

Michelle Bachmann showed off her comedic skills at a debate this week when she mentioned that she doesn't like political speech.