An inexcusable exchange between 980am ESPN radio shosts Steve Czaban and Andy Pollin has folks calling for their suspension, and rightly so. 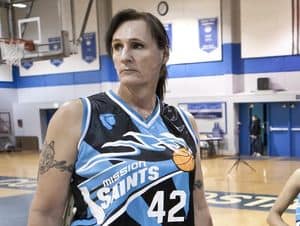 They make fun of Ludwig’s appearance, including her biceps and tattoos. Clearly reacting to photographs, they expressed deep-seeded disgust at her appearance. “That could be a Russian chick,” they said as they cackled.

They referred to her as “he/she” and as “it.” “I think ‘it’ is the politically correct term.”

Listen to the rant, AFTER THE JUMP…

The hosts reportedly made a 10-second non-apology for their language.

Writes Outsports: "These men are a disgrace to their profession, and they should be suspended without pay."

The horrific comments by ESPN’s Radio’s Steve Czaban and Andy Pollin show a level of disrespect and harmful rhetoric that is inexcusable.  They called Gabrielle Ludwig, transgender  California Community College student-athlete, “it”.  This and their entire transphobic rant shows a level of ignorance and just plain ‘meanness’ that I try to stay away from.  Unfortunately, the many transgender sports participants I have had the privilege to work with, are not shielded from hateful people such as Steve Czaban and Andy Pollin.  I would think that a sports network that espouses respect for LGBT people will see the harm that is occurring with this rant, be forthcoming with an apology and take immediate action against these two so-called sports radio professionals.