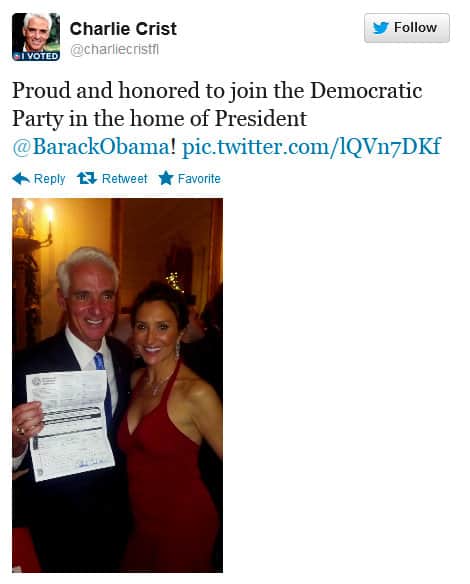 "I've had friends for years tell me, 'You know Charlie, you're a Democrat and you don't know it," so said former Florida Gov. Charlie Crist last night after leaving a holiday party at the White House, where he finally, after dipping his toes into the water as an Obama-supporting "independent" for a few years, registered as a Democrat. And according to Crist, it's the party's fault he left in the first place.

President Obama clearly approves: he reportedly congratulated Crist with a fist bump, which in Democratic circles is as good as being knighted, but doesn't necessarily guarantee Crist a spot at the head of the line for another gubernatorial run.

From the Tampa Bay Times:

"Crist was an absolute warrior for President Obama and as a result, many of the party activists I talk to are willing to welcome him with open arms, and there is no question he is an extremely viable candidate for governor, though I don't think that beating Alex Sink in a primary is any kind of sure thing," said Democratic strategist Steve Schale, who worked on Sink's campaign as well as both of Obama's Florida campaigns.

Sink says Crist's move has not influenced her decision whether or not to run.