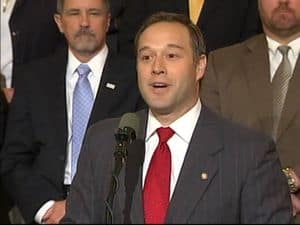 Mike Fleck, a Republican State Rep. from Pennsylvania, came out of the closet today, a closet he stayed in for nearly 40 years because of his religion and his relationship with the Boy Scouts of America.

“Coming out is hard enough, but doing it in the public eye is definitely
something I never anticipated,” said the lawmaker, who was married to a woman for more than adecade, according to PoliticsPA.

“I’m still the exact same
person and I’m still a Republican and, most importantly, I’m still a
person of faith trying to live life as a servant of God and the public.
The only difference now is that I will also be doing so as honestly as I
know how.”

Fleck, who is 39-years old and an Eagle Scout, said his staff position with the organization contributed to his staying in the closet.

From the subscriber-only Huntingdon Daily News, which broke the story:

As an executive for the organization, Fleck said “now my livelihood depended on hiding my true sexual orientation, something I was very good at.”

He continued that during his 20s, he firmly believed what he’s been taught, that homosexuality was a choice and so never felt in great conflict because he’d learned to suppress his feelings.

“I wanted to live a ‘normal’ life and raise a family,” Fleck said. “I also believed that by marrying, I was fulfilling God’s will and I thought my same-sex attraction would simply go away.”

Fleck also said that he tried religious therapy to rid himself of same-sex desires, but to no avail. “I sought out treatment from a Christian counselor, but when that didn’t work out, I engaged a secular therapist who told me point blank that I was gay and that I was too caught up in being the perfect Christian rather than actually being authentic and honest,” he said.

As for his ex-wife, Fleck said she remains his best-friend. “My wife and I became closer than ever [after I came out to her], but it was bittersweet as we both concluded that the marriage was over,” he said.