Rachel Maddow took a look at the sad state of the Republican Party as evidenced by Rick Santorum's new gig as a columnist for the leading birther wingnut rag World Net Daily, which pushes, among other whackjob memes, that Obama is secretly foreign, secretly Muslim, and secretly gay, and was secretly gay-married in college. You can also buy a "how-to" DVD on its website on defensive cane fighting. 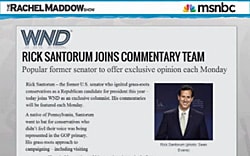 "The guy who actually came in second to Mitt Romney this year, the guy who was the runner-up in the Republican Party's efforts to pick their nominee, the guy who could have been Mitt Romney if for some reason it didn't work out for Mitt Romney, he landed at Wrld Net Daily. He's sharing speace with the Whtie secession guy. We have a 2 party system in this country and that is what half of our two party system is. That is half of what is supposed to be plausible in American politics. Rick Santorum at World Net Daily. Also cane fighting!"

Previous Post: « ‘ParaNorman’ Filmmakers on Outing The Gay Jock Mitch
Next Post: Arizona Governor Jan Brewer is Gone and No One Knows Where »