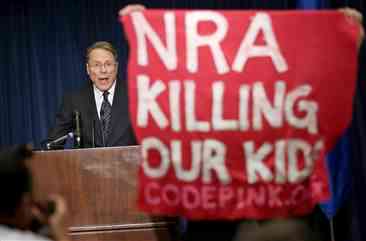 After promising "meaningful contributions", the National Rifle Association finally addressed the public today, a week since the shootings in Newtown. It turns out the only meaningful thing to come out of Wayne LaPierre's press conference was when he was interrupted by a protester. Want to know more about the NRA and feel that your stomach can handle it? Jason Bellini of The Wall Street Journal offers a brief history of the group.

First Lady Michelle Obama has reached out to the people of Newtown with an open letter published in the Hartford Courant in which she expresses her sympathies. Also her husband Barack responded to petitions for stricter gun control, saying in part "we hear you".

As expected Hillary Clinton's replacement as Secretary of State will be former presidential candidate Senator John Kerry. Shockingly, and thankfully, John Boehner's 'Plan B' has suffered an embarrassing failure.

In a very moving tribute to the victims of last week's shooting in Newtown, The Los Angeles Gay Men Chorus performed a hauntingly beautiful rendition of David Bowie's Peace on Earth.

On a much much lighter note, Paul Rudd stopped by Anderson today and tickled Cooper with his pickle.