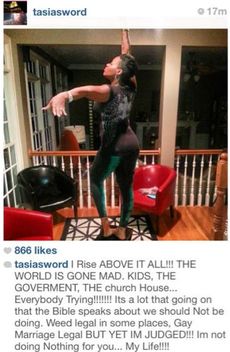 Singer Fantasia Barrino has released a personal statement, as opposed to that publicist's statement, about that Instagram post in which she suggested marriage equality proves the world has gone mad.

It has been brought to my attention that something I said was taken out of context. I, Fantasia Monique Barrino, don’t judge anyone because I don’t want to be judged.

Is that that, as Barrino would like, or has the damage been done?