The first ever women's UFC fight will take place tonight and one of the athletes in the event, Liz Carmouche, is also the only openly gay fighter in the sport. 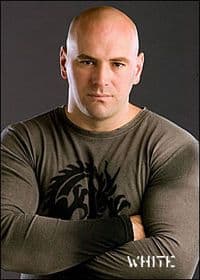 Leading up to the fight, both Carmouche and UFC president Dana White are talking about the historic competition and about openly gay fighters. Carmouche tells AXS TV that she hopes her coming out will inspire others in the UFC to follow her lead:

"I hope that they can see that in such a testosterone and male-dominated sport, it would be so difficult to come out, that it's possible and they can do it too."

White, who has commended Carmouche for her coming out last year, was asked yesterday how he would react if a fighter refused to compete against an opponent who was gay. According to Yahoo's Cagewriter blog, this was White's positive response: "Most of the guys that are in this sport are really good people. I honestly don't see a situation where that would happen, but if it did, I'd fix it."

White on inclusiveness in the sport: "If you're an athlete in the UFC and you are gay, I could care less. You will not be treated any different."

Watch AXS TV interviews with Carmouche and White, AFTER THE JUMP.