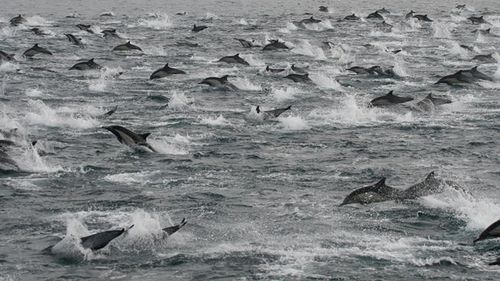 On last night's Downton Abbey, the Dowager Countess of Grantham Violet Crawley so wisely observed: "That's the thing about nature; there's so much of it."

And that would certainly be the case late last week off the coast of San Diego, where this seven mile-long mega-pod of more than 100,000 dolphins was spotted following a boat.

Dutra said the boat tour followed the pod for more than an hour and said he’s never seen anything like it.
“When you see something that is honestly truly beyond belief,” the captain said.

Guests aboard the boat started screaming and pointing when they first saw the school of adult and juvenile common dolphins. Dutra estimated there were about 100,000 dolphins swimming in the area.

“They were coming from all directions, you could see them from as far as the eye can see,” he said. “I’ve seen a lot of stuff out here… but this is the biggest I’ve ever seen, ever.”

Watch the video shot by someone on board, AFTER THE JUMP…