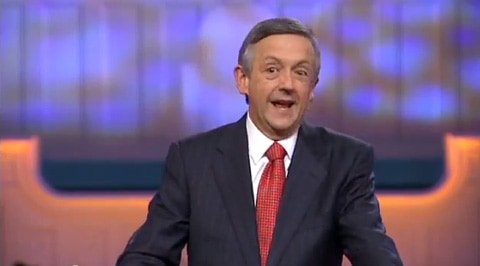 In his Sunday sermon at the Frist Baptist Church in Dallas, Dr. Robert Jeffress responded to the controversy surrounding Tim Tebow's now canceled plans to speak to the church, and the positions that led to public outcry, Think Progress reports.

You know, it is an amazing thing to me that a church is called anti-Semitic simply because we preach that everyone — Jew, Baptist, Catholic, Hindu, atheist — everyone must trust in Christ in order to go to Heaven. It’s amazing to me that we’re called anti-gay simply because we say sex ought to be between a man and a woman in marriage; somehow that’s construed to be anti-gay. […]

The bad news is there is such a thing called sin, and the Bible says we are all guilty of it, and we are all headed for an eternity of separation from God. But it the good news of the Gospel of Jesus Christ is it doesn’t matter who you are or what you have done. It doesn’t matter whether you were a Jew, a Baptist, a Catholic, a Muslim, a Hindu, a homosexual, an adulterer, a thief, or a cheat. It doesn’t matter what you’ve done, you can be forgive of your sins if you trust in Jesus Christ as your savior. That’s not a message of hate; that’s a message of hope.