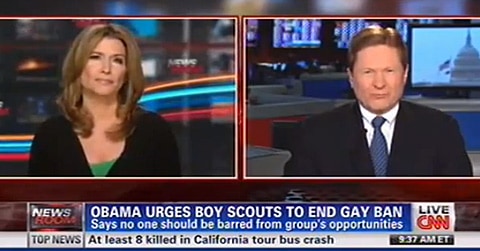 CNN's Carol Costello spoke with hate group leader Peter Sprigg of the Family Research Council, the group who took out the full page ad in USA Today urging the Boy Scouts to retain its gay ban.

Sprigg says that parents have the right to protect their kids from teh gay.

Said Sprigg: "The mere fact that someone openly identifies themselves as homosexual means that they are modeling for boys the acceptability of homosexual conduct. And parents who do not agree with that view have a right to protect their children form that…They have a right to protect their children from the potential risk of child sexual abuse at the hands of men who might be attracted to other males."

Costello correctly asserts the APA study that shows homosexuals are not any more likely to molest kids than straight men.

"Unless you're condemning every single homosexual in the country as being a possible pedophile, that's not fair!"