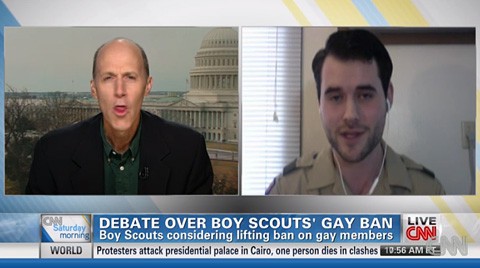 Ed Whelan is a homophobic parent and President of the Ethics and Public Policy Center, and wrote an op-ed in the New York Post last week that said this:

Imagine that a group of girls is going on a long camping trip, supervised by adult volunteers who are young men you barely know. Would you let your 15-year-old daughter go?

Nearly every parent, I think, would recognize the folly, even though the men might well be models of good behavior. Why should our common-sense response be any different if the 15-year-old is a boy and the possible, even if not-likely-to-be-acted-on, sexual attraction of the adult supervisors is homosexual rather than heterosexual?

Whelan appeared on a CNN segment on Saturday with Scouts for Equality president Zach Wahls, who laid waste to all of Whelan's bigoted arguments.

Previous Post: « Boy Scouts to Receive Delivery of More Than 1.4 Million Petitions Calling for End to Gay Ban
Next Post: Gay Wedding Video of the Day: Clinton and Callum »