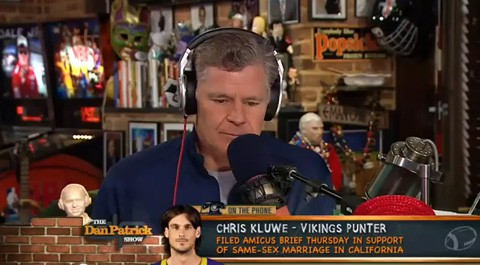 Vikings punter Chris Kluwe spoke with The Dan Patrick Show this morning about the recent reports that NFL recruiters were asking potential draftees about their sexual orientation.

Kluwe explained why he thinks teams are doing that, why it's wrong, and whether or not, given what's happened in the past few days, if a player might be more or less likely to come out of the closet.

Patrick also asks Kluwe how much homophobia there is in the locker room.

"It's there casually in some respects. I don't know that I've ever seen any outright hatred of gay people in the locker room like someone just frothing at the mouth. I think a lot of it has to do with how guys are brought up, the unthinking assumptions they make from their backgrounds. For a lot of guys once they're educated, once they actually get a chance to talk about the issue they see how dumb that is. People are people. It doesn't matter what your sexuality is."

Watch, AFTER  THE JUMP…