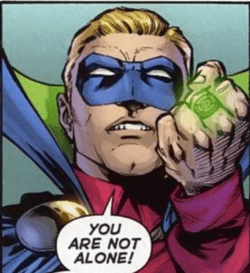 Comic fans and creators were on hand at the Emerald City Comicon in Seattle this weekend, and that includes James Robinson, the comic book creator whose work includes the excellent 90s-era Starman and more recent work on the pre-relaunch Justice Society of America and Justice League of America series.

Now that DC has completely retooled its super-powered roster, Robinson’s in charge of Green Lantern Alan Scott, aka the Golden Age Green Lantern who was reintroduced as a gay man on a quest to avenge his lovers’ death.

Of course Alan Scott was a topic of conversation during Robinson’s talk at ECCC this weekend, and Comic Book Resources fills us in on what he had to say, and how Warner Bros, producers of the Green Lantern films, was confused over the structure of the Green Lantern Corp.

Robinson concluded the interview by talking about his current work on “Earth 2,” and specifically the motivations behind writing Alan Scott as gay. He lamented the loss of Obsidian, Alan Scott’s son, who was a gay character featured in “Justice Society of America.”

“There are so few gay characters, I felt like it was a shame to have one of these iconic characters go away. It occurred to me why not make Alan Scott gay, and make him this cool guy?” Robinson said.

Alan Scott was so well received that Robinson received a GLADD nomination for his work. “Having a gay character is part of diversity,” he said.

The sexual orientation of Alan Scott didn’t faze DC publisher Dan DiDio, who supported Robinson’s decision. Warner Brothers, however, was confused: did this mean that star Ryan Reynolds, who played Hal Jordan in the 2011 film adaptation of “Green Lantern,” would be gay?

“Geoff (Johns) had to go in and explain that there were lots of Green Lanterns, and this was just one of them,” Robinson said.