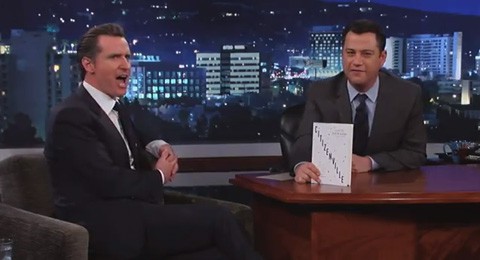 California Lieutenant Governor Gavin Newsom, the man who defied his state's same-sex marriage ban and began marrying gay couples in 2004, joined Jimmy Kimmel last night and as it usually does when Newsom is around, the topic of marriage equality came up.

Newsom applauded Obama for opposing Proposition 8 before the Supreme Court and for his evolution on the issue.

"The idea that within this period of ten years a President would actually use the words marriage equality and support same-sex marriage is an extraordinary thing. I couldn't be more proud of him and the progress this country has made on the issue."

Kimmel and Newsom also discussed the Republican amicus brief that was filed, and Newsome noted that "it tends to be mostly ex-politicians" who signed it but praised the two current congresspeople who signed it for their leadership."