Senator Kay Hagan (D-NC) has become the sixth U.S. Senator in three days to come out for marriage equality, in an article in the News & Observer: 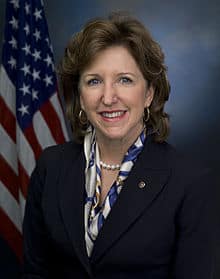 “I know there are strong feelings on both sides, and I have a great deal of respect for their opinions,” Hagan said in an interview. “But after much thought and prayer on my part this is where I am today.

“I know all our families do not look alike,” she added. “We all want the same thing for our families. We want happiness, we want health, prosperity, a bright future for our children and grandchildren. After conversations I’ve had with family members, with people I go to church with and with North Carolinians from all walks of life, I’ve come to my own personal conclusion that we should not tell people who they can love, or who they can marry. It’s time to move forward with this issue.”