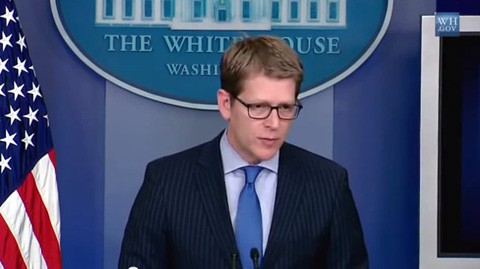 White House Press Secretary Jay Carney was asked yesterday by the Washington Blade's Chris Johnson about the President's commitment to the Employment Non-Discrimination Act, which is being introduced in Congress this week.

"The administration will continue to work to build support for this important legislation because we believe that this is the right way, the right approach to take, because it is inclusive and that’s why we supported it then, that’s why we’re glad to see it being reintroduced."

When asked for "one thing" the President has done in the past year to build support for ENDA, Carney couldn't really say:

“His support for this specific legislation, I think, is reflected in the fact that it’s being introduced, as you said, in the House and the Senate. And he will work with like-minded lawmakers who support movement on this legislation to see it pass and ultimately signed into law. That’s how this process works. This is the approach the president thought was the right one to take and he’s encouraged by the progress being made.”

In a piece by Reuters last week which noted the White House's sluggishness on the issue, Lambda Legal's Jon Davidson said "there's more that he can do" and in March, 110 House lawmakers signed a letter calling for Obama to bypass the languishing legislation and issue and executive order protecting LGBT workers from discrimination.