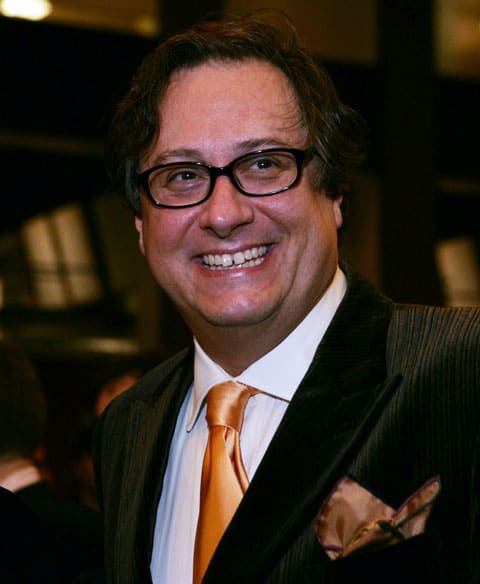 It’s been a busy season on Broadway for playwright DouglasCarter Beane. In addition to penning the new adaptation of Rodgers and Hammerstein’s Cinderella that opened last month, hisnew play The Nance, starring NathanLane in the title role, opened on Monday in a Lincoln Center Theatre production directed by Jack O'Brien at the Lyceum Theatre. 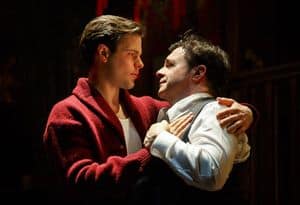 Also the writer behind cult movie classic To Wong Foo Thanks For Everything, JulieNewmar, as well as Broadway cult hit Xanadu,Beane has a distinct way of crafting campy humor with a wry and clever hand.The Nance marks his first non-musicalouting on Broadway since his much-acclaimed play The Little Dog Laughed in 2007.

Set in 1930’s New York, the play stars Nathan Lane asChauncey, a burlesque performer whose stage specialty is the ‘nance’ routine.One of about a dozen different standard sketches common to burlesque, the nanceis a caricature of an effeminate man, who is goofy, endearing, and speaks inrapid-fire double entendres.

Lane’s character Chauncey also happens to be gay himself, whichnot many nance performers would’ve been necessarily—certainly not openly. Inthe play’s first scene, Chauncey meets a young man named Ned (Jonny Orsini) withwhom he develops a tenuous, restless bond. The play follows their relationshipthrough the tumultuous politics of the time, and the pressures put on theburlesque scene during mayor LaGuardia’s tenure.

I talked to Doug about his process writing the play, howpolitics can affect one’s sex life, and what’s next on the writer’s plate.

NAVEEN KUMAR: Whatinspired you to write this play? Did you know much about 1930’s burlesquebefore you started? 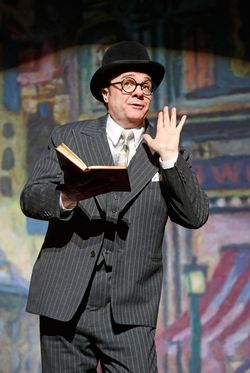 DOUG CARTER BEANE:I didn’t. I knew a little bit, because when I was a kid this was a big part of varietyshows, like The Carol Burnett Showand Jackie Gleason and all those guys. That was my first encounter with it, andthen it was back in vogue about ten years ago. There was a club in Los Angelescalled Forty Deuce, and there were places in New York doing nights ofburlesque.

We were doing a benefit [at my theatre company called DramaDepartment] and somebody suggested that we do an evening of burlesque. Thereare ten basic forms of each sketch; there’s a vague outline of a plot and thenthey would just insert jokes in. So [when] I would meet men over the age ofseventy, I would ask, ‘Did you ever go to see burlesque when you were a kid,and do you remember any of the routines?’ They would remember these linesverbatim.

There’s one joke that Robert Altman remembered, there’s ajoke that Herb Ross remembered—everyone’s dead now who gave me these jokes! SoI put them in my versions of these sketches, and the benefit was verysuccessful.

Then I went to a writers’ retreat, and I brought along theGeorge Chauncey book [Gay New York: Gender, Urban Culture, and the Making ofthe Gay Male World, 1890-1940].I also had a Berenice Abbott photograph of the Irving Place Theatre, which isaround the corner from my house, and I thought that was really beautiful (thoughit was torn down in the 80s). So it was the photograph, a book I was reading,and I had these sketches in my computer. It all pulled together into one story.

I wrote the first scene and I thought, who is ever going to be able to play this? The first person Ithought of was Nathan Lane, and I thought, well,that’s never going to happen so come up with another list and keep writing.When I finally finished it years later, the first thing I did was to send it toNathan Lane and he said, ‘I love this, when can we do it?’ We did a reading thenext week and here we are now.

NK: Can you talk a bit about how you wrote your ‘nance’routines? Were there common stereotypes they generally played off historically? 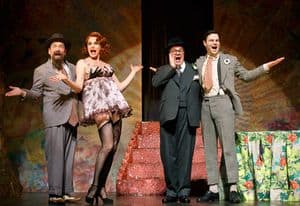 DCB: In the 30s sketches, he’s very innocent. He doesn’tknow why the audience is laughing at him, which I thought was theatrically veryexciting because it requires the character to say something very dirty but notknow he just said something dirty. Then he’s always looking at the audience going,‘Why are you laughing at me? What? Stop it!Oh, behave! You’re brutes! You’re terrible!’ and that I thought was adelightful energy because it forces the actor to engage with the audienceconstantly. It also lets the audience be ahead of the actor in an interestingway.

NK: Right, and the nance routines you’ve written have acertain affection for the character built into them, but was that always thecase or is this a sort of reclaiming of the form?

DCB: They do, and if you watch the sketches, they start toturn on the nance. As I did research, in 40s and 50s burlesque, the nance isless and less tolerated and rejoiced in, and by the 60s, he’s an object ofridicule and he’s mocked, and they say horrible things about him. Whereas inthe 30s, the common punch line is that he winds up getting the guy to sleepwith him, or has [already] slept with the guy, the straight man.

I would think, I can’tbelieve they just said that, when I read these old sketches. So I would takejokes or come up with ones that I remembered, or write something similar in style.With some of these jokes, not until you read them out loud did you realize the doubleentendre, it was so subtle.

NK: Chauncey is a gay Republican—an interesting combo in anyera—what made you choose to write the character that way? 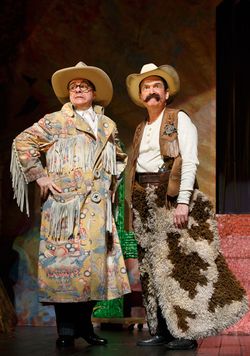 DCB: A Republican then is very different from what aRepublican is now, but there was something about the Republican line in thatperiod, which was, you’ve got to getthrough it on your own and you can’t be relying on everyone to take care ofeach other. I thought well that’s an interesting point of view for acharacter, and how does one’s politics manifest itself into one’s personal lifeand into one’s sex life?

I have a place in Pennsylvania and it is very Republican. Iwas watching a television special about voting habits [there], and the centerpart of northern Pennsylvania has voted Republican for hundreds of years. SuddenlyI’m thinking, 1932—the depths of theDepression, and you’re not going to give Roosevelt the benefit of the doubt?I thought that was really fascinating—someone who’s sticking to their guns,who’s going to vote against their interest.

What I’m proud of about the play is that [Chauncey] is amoral person, he’s a good person and that comes out at the end, and the farleft wing characters wind up getting burned as much as he does.

NK: It’s interesting what you said about how his values play outin his sex life. I was going to ask, what do you think are the major roadblocksfor him accepting himself, and accepting Ned’s love (his romantic interest inthe play)? Is it his conservative mindset of ‘you’re on your own?’

DCB: No, I think that’s one part of it. Also, gay life as ithas been explained to him does not make sense with what gay life was going tobe in the next ten years, in terms of gay history. He has been taught a certainway. Ned represents the next generation, World War II gay men, which is filledwith just as much discrimination, but there began to be real people havingrelationships—saying, ‘We’re going to be quiet about it, but we’re doing it.’But really, there was a much greater sense of sexual freedom, as part of whatbeing gay was [before then] was to have sex with straight men only in a passiverole.

So it’s a little snapshot of that period, but it’s also whatI see happening today with gay men in their 20s in conversation with gay men intheir 50s.

NK: You mean how much more comfortable younger men are?

DCB: Yes, guys I know who are in their 20s are looking forhusbands. That was not even to be considered. When I was young and gay, whatolder people believed [about homosexuality] was much more in line withChauncey’s generation. 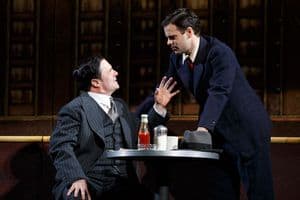 You know there’s that book, Everything You Always Wanted to Know About Sex (But Were Afraid To Ask).I remember I read it when I was really young, like twelve or thirteen. The viewon homosexuality is just so appalling. It’s all in Q & A form and I rememberone of the questions, ‘But can’t two gay men or two gay women have a lastingrelationship?’ and the answer is, ‘No, not really!’ and on to the nextquestion.

I think that was 1972, that was a doctor dispensing wisdomin a book. So I read that as a kid, and I said, ‘OK, got it. I have to go tobowling alley bathrooms now to meet guys. I don’t really like bowling alleys orbathrooms, but I guess that’s what I have to do.’ It was just awful, reallyhilariously bad. In fact, he’s still alive and I haven’t heard him apologizefor that!

But that’s just one little example—how society views youaffects how you view yourself.

NK: So what’s next for you? Any projects on the horizon youcan discuss?

DCB: Well, I did two shows this season and that justabout killed me! But the next big project will be for the Metropolitan Opera,I’m doing Die Fledermaus next season,a new book adaptation with a new take on it. That opens on New Years Eve andwill run through January and February.

I loved writing history so much that the next couple thingswill involve research. I’m going to do a new musical with my partner LewisFlinn, who I did Lysistrata Joneswith. We’re beginning research right now on a new musical, which we’ll probablyannounce soon.

Previous Post: « Jeremy Irons: ‘Marriage is About Procreation’ — VIDEO
Next Post: In New GLAAD PSA Campaign Created by Brett Ratner, Allies Come Out of the Closet for Equality: VIDEO »