Lisa Winters, the former head of the Bronx Community Pride Center (she was fired in 2010) was charged with larceny in June 2012 over her embezzlement of at least $338,000 in funds from the Center for her personal use. 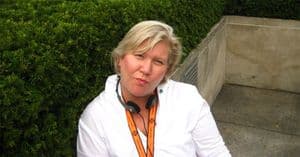 Yesterday, she was sentenced to at least two years in prison, the NY Post reports:

Blubbering Lisa Winters was led away in cuffs after Bronx Supreme Court Justice Martin Marcus signed off a deal that’ll keep her locked up for two to six years.

She pleaded guilty to second-degree larceny on Feb. 14, in connection to her $338,000 rip-off of the Bronx Community Pride Center. Winters siphoned the money to pay for personal expenses such as a dog walker and expensive meals.

“I’m so sorry to all the people that I hurt,” Winters said through a flood of tears. “I’m so sorry for all the harm I caused.”

Even in apologizing, Winters made excuses for the embezzlement and hid behind her mom. “I can’t believe I’m in this position,” she said. “My mom was dying, I don’t know what I was thinking.”

The judge didn’t buy any of Winters’ tearful explanations and called her crimes a “betrayal of trust.”