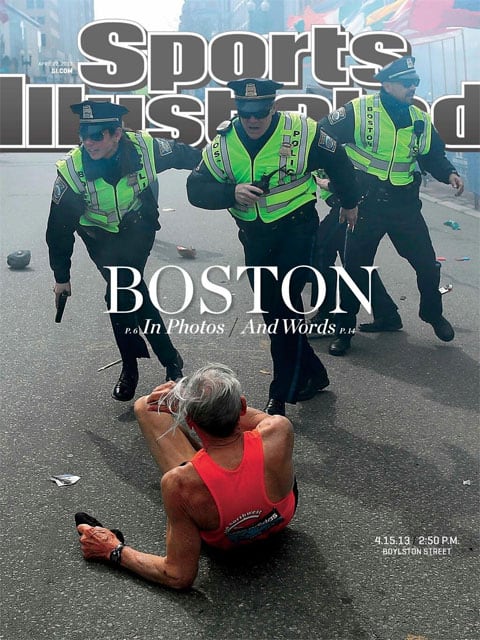 A new Sports Illustrated cover features a photo that is among the most circulated after the Boston Marathon bombings and shows 78-year-old Bill Iffrig of Lake Stevens, Washington, who was knocked off his feet by the bomb blast, along with three Boston police officers taking action after the attack.

The police officer on the right is the Boston Police Gay Liaison to the community Javier Pagan, Boston Pride reports.

Officer Pagan’s husband, Pedro, is a retired sergeant from the New York Police Department who rescued many people when the Twin Towers collapsed on Sept. 11, 2011, according to a recent profile of Pagan by a Boston CrossFit site. Pagan also escorted LGBT civil rights attorney Mary Bonauto to City Hall Plaza on May 17, 2004, when the Massachusetts Supreme  Judicial Court ruled in favor of marriage equality.

Pagan, a native of Puerto Rico who came out at 26 a year after joining the force, was profiled by the Bay Windows LGBT newspaper when he was named to the position in 2002.

While we're identifying Pagan because this site deals with many LGBT issues, we should take a moment to thank ALL first responders and everyone who stepped up in this time of crisis.

Incidentally, Iffrig was okay. ESPN spoke with him yesterday.