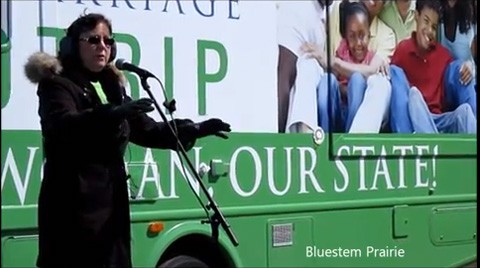 National Organization for Marriage leader Jennifer Roback-Morse broomed in to Minnesota over the weekend and told the sparse crowd at a 'traditional marriage' rally there that she wears hunting earphones so she won't have to listen to reality.

. . .I was told that there might be a few hunters in an area like this and so I brought my ear protectors. I'm not a hunter myself. Do you guys have these sort of ear protectors? They're very snazzy. You can turn they on and they block out the noise, they block out a big loud noise like when you shoot your gun, it blocks out–you guys know what I'm talking about here?

Good, good, good. People in San Diego have no idea what I'm talking about. But I can hear you because I've turned up the volume on my little headset here. You can hear what you want, but you block out the noise.

Now why would I wear earprotectors to a marriage rally? Because there's a lot of noise in the marriage debate. You know what I'm talking about? Everytime somebody says, "You're a bigot," that's just noise. That is just noise. That is designed to keep you–when somebody says that, what happens? You go Ohh! . . .you suddenly immediately recoil, just like the shotgun going off in your ear.

So you have to do something to stop the noise, so you can think. And the people on the other side are very deliberate and intentional from keeping the subject away from the subject. Instead of the subject being, "What is marriage and why do we need it?," the subject is, "What's wrong with you guys that you're so mean to us and that you're on the wrong side of history?" That's what they want to talk about.

Roback-Morse also called marriage equality "nothing but a government registry of friendships."

When Vaughan Walker overturned Prop 8, he came up with a purpose of marriage that was completely gender-neutral. He said something like, “It’s the state recognition for two people who want to share their commitment with one another, and share resources, and take care of any dependents, if any,” you know? If you look at that purpose, there’s nothing there about children. It doesn’t even have to be a sexual relationship… It’s nothing but a government registry of friendships.