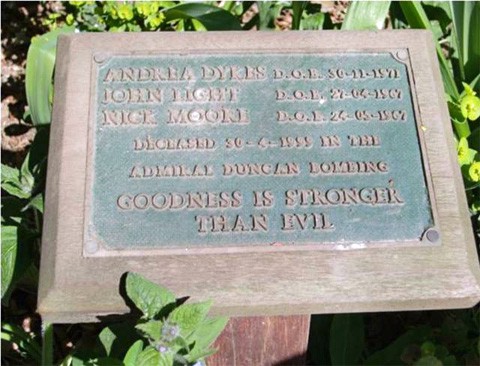 In 1999, the Admiral Duncan Pub on Old Compton Street in London's gay SoHo district was bombed. Three people died. Now a plaque in memory of Andrea Dykes, John Light and Nick Moore has gone missing, No To Hate Crime reports:

Mark Healey from 17-24-30 noticed that it had gone during recent checks. “If anyone has taken the plaque I hope that they will return it. It is a shame that it has gone missing as we approach the 14th anniversary of these horrific attacks.”

Mark has been in touch with the Moore family, St Anne’s Church, the local police and Westminster Council – unfortunately no-one knows where the plaque is.

A new plaque is on order.

The Admiral Duncan bombing was the third of three nail bomb attacks carried out by David Copeland who wanted to stir up fear and hatred so that the British National Party would be elected. Luckily his plan failed but not before he had planted three bombs over the course of three weeks targeting the Black communities of Brixton (17th April), the Asian communities of Brick Lane (24th April) and the Gay communities of Soho (30th April).

The three nail bomb attacks left three people dead in Soho and over 150 people injured (47 people in Brixton, 6 in Brick Lane and 97 in Soho).