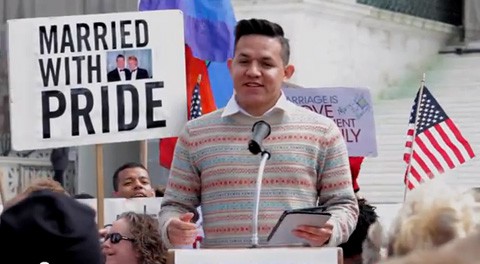 In the midst of a tremendously historic week for our community, two unfortunate incidents at the United for Marriage event at the Supreme Court last week have caused pain in the community.  In one case, a trans activist was asked to remove the trans pride flag from behind the podium, and in another, a queer undocumented speaker was asked to remove reference to his immigration status in his remarks.

HRC joined in a coalition statement on Friday apologizing for these incidents and the individuals involved have personally offered their apologies to those affected.  But to be perfectly clear, HRC regrets the incidents and offers our apologies to those who were hurt by our actions.  We failed to live up to the high standard to which we hold ourselves accountable and we will strive to do better in the future.  Through both our legislative and programmatic work, HRC remains committed to making transgender equality a reality.

HRC's statement, which follows apologies from the United for Marriage Coalition (HERE) and a statement from GetEQUAL (HERE) comes after reports of the two incidents surfaced on the internet. The blog Transition Transition demanded an apology for the flag removal incident, and the Queer Undocumented Immigrant Project (QUIP) posted a video asking for one as well.