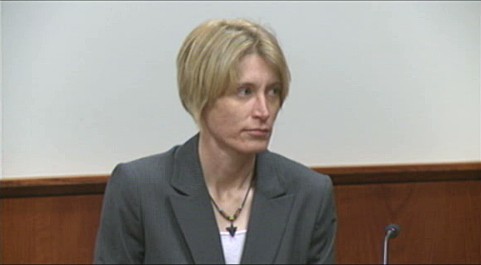 Charlie Rogers, the Lincoln, Nebraska lesbian who was found guilty of faking a hate crime for claiming she was attacked by three men who broke into her home and carved “dyke” into her stomach before setting her house ablaze, was sentenced to a week in jail and two years on probation by a Lancaster County judge yesterday.

Lancaster County Judge Gale Pokorny on Thursday morning also ordered the 34-year-old to do 250 hours of community service for lying to police when she told investigators three men broke into her house, tied her up, carved anti-gay slurs into her skin and tried to light the house on fire.

“The evidence is overwhelming that Charlie Rogers’ narrative of July 22, 2012, was an incredible and outrageous lie the second it passed her lips,” Pokorny said.

Rogers will start her jail sentence April 29. She could do another 90 days behind bars in 2015 if she does not complete probation. Pokorny also ordered her to take a comprehensive psychiatric exam and give her probation officer access to all her medical records.

Video of Rogers’ sentencing, AFTER THE JUMP…