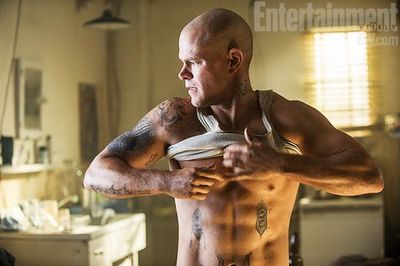 PHOTO OF THE DAY: Matt Damon is looking buff in "Elysium".

There was a heart wrenching story out of Kansas City, MO today where a gay man was reportedly arrested after refusing to leave the bedside of his sick husband. Disgusting. Troubles keep on piling up for the the anti-gay florist from Washington State as she now faces not only a lawsuit from the state's Attorney General but also from the gay couple to whom she refused service. It turns out that the people behind the "God's Marriage Bow" campaign not only hate gays but also originality.

A group of anti-gay super conservatives in the Republican Party have sent a letter to RNC Chairman Reince Priebus notifying him that they will leave the party if it abandons its anti-gay marriage stance They also resent the claim that they have 'treated homosexuals unkindly'. Can't argue with the facts guys. An RNC Committeeman from Michigan also thinks that schools are turning kids gay. And in Montana a definitely "not homophobic" State House member compared homosexuality to a pen in its retracted position.

Bill O'Reilly continues to show that he has at least a modicum of human decency as he is standing by his support of gay marriage. The National Hockey League has announced a groundbreaking partnership with an anti-homophobia group. Maybe we should all be watching more hockey? Also take a look at the jubilance of the moment marriage equality passed in Uruguay.

American Idol contestant Candice Glover wowed the crowd with her cover of The Cure's "Love Song" last night. And watch out for giant mega sharks and diving giraffes.