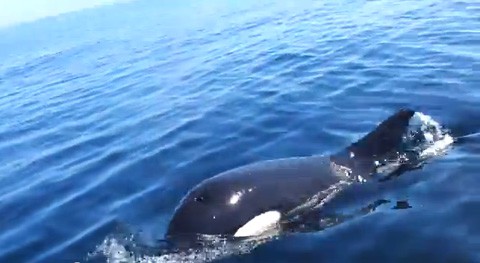 As a follow-up to my post of last week, here's a recent rare Orca encounter near Denmark, kindly translated by someone on Reddit:

There, there, look at that!
NO, they're coming over here, dammit! Sail dammit, sail dammit! They're right under us, they're huge. I am afraid of them!
Don't be.
Emil, for f**ks sake, it's Orcas! get me out of here.
Take a picture!
I am filming.
Look at that, now take some pictures!
I am filming it!
Look at the fin on that one… Now hold fast when they (BEEPING) or you'll be knocked off.
This is insane!
Just take a look at those fish, no it's Orcas dammit.
It's Orcas, Emil… SHUT UP!
It's the world's most dangerous fish… Take some pictures.
I AM filming it! I've got it all on film.
Look at that fin on its back… This is crazy!
They're under the boat!
They're gone now… This was crazy! They were huge, Mikkel!
NO, they are coming back! I don't want anything more to do with this sh*t.
Are you afraid of fish?
I'm afraid of f**king Orcas!