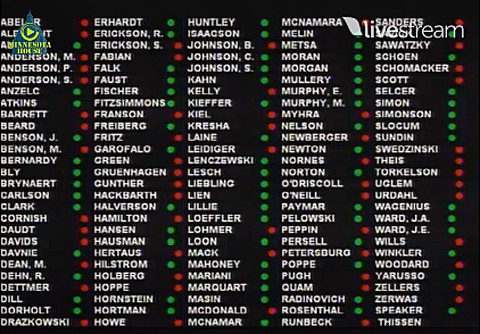 Minnesota's House has approved marriage equality after three hours of debate in a vote of 75-59!

The bill now goes to the state Senate for consideration. Minnesota is poised to be the FIRST midwestern legislature to approve
marriage equality! Iowa's marriage equality law was ushered in by the
state Supreme Court.

It's rather an insane turn of events for a state which just six months ago was waging a furious (and unsuccessful) campaign to amend the state's constitution to ban same-sex marriage.

Though no Republicans had said they were 'yes' votes beforehand, four of them — David FitzSimmons of Albertville, Pat Garofalo of Farmington, Andrea Kieffer of Woodbury and Jenifer Loon of Eden Prairie — voted with the Democrats.  Democrats Sawatzky and Fritz voted no.

Debate in the House got underway in the early afternoon, as thousands of supporters and opponents gathered outside the chamber. House Democratic leaders and the bill's supporters were confident it would pass. If it passes Monday in the Senate, Democratic Gov. Mark Dayton could be sign it into law by early next week and make Minnesota the 12th U.S. state to legalize gay marriage.

"My family knew firsthand that same sex couples pay our taxes, we vote, we serve in the military, we take care of our kids and our elders and we run businesses in Minnesota," said the bill's sponsor, Rep. Karen Clark, a Minneapolis Democrat who is gay. "… Same-sex couples should be treated fairly under the law, including the freedom to marry the person we love."

Opponents argued the bill would alter a centuries-old conception of marriage and leave those people opposed for religious reasons tarred as bigots.