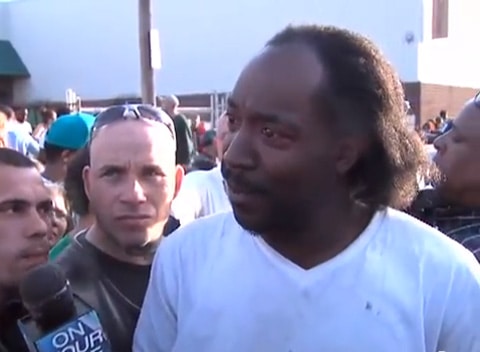 An incredible story out of Cleveland. Charles Ramsay, a neighbor, yesterday rescued Amanda Berry, Gina DeJesus and Michelle Knight from a Cleveland home where they had been kidnapped for more than 10 years, News 5 reports:

Hundreds of people gathered in the streets near 2207 Seymour Ave. in Cleveland, where the women were discovered. Cleveland police said Berry, DeJesus and Michelle Knight are alive, talking and appear to be OK.

“I heard screaming… And I see this girl going nuts trying to get outside,” said Charles Ramsey, a neighbor who found the women. “I go on the porch and she said ‘Help me get out. I’ve been here a long time.’ I figure it was domestic violence dispute."

“She comes out with a little girl and says ‘Call 911, my name is Amanda Berry’… When she told me, it didn’t register.” He said he made the call and gave Berry the phone. When police arrived, officers asked him if he knew who he rescued.

Berry disappeared at age 16 on April 21, 2003, when she called her sister to say she was getting a ride home from her job at a Burger King. DeJesus went missing at age 14 on her way home from school about a year later. They were found just a few miles from where they had gone missing. Police said Knight went missing in 2002 and is 32 now. They didn't provide current ages for Berry or DeJesus.

The 911 call after being rescued: