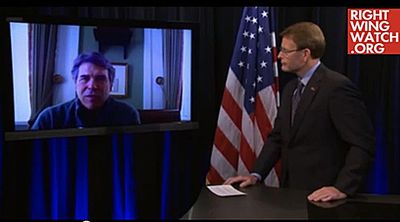 Over the weekend the Family Research Council held a webcast event entitled "Stand with Scouts Sunday" that was, for lack of a better term, a hatecast. The event featured a plethora of wingnuts. Rick Perry was on hand to tell viewers that the 'pop culture' of the gays will destroy the Scouts. We do love pop culture. A congressman from Mississippi also spoke about how gays are being "crammed down the Boy Scout's throats." Also here are a couple carefully selected Scouts discussing how gays will likely hit on other Scouts.

Pat Robertson doesn't like that people get in trouble for being bigots and believes that gays can change just like murders and rapists. The Archbishops of San Francisco and Rhode Island have warned fellow Catholics against the dangers of attending same-sex weddings. A Catholic school in Wisconsin has rejected a newly appointed president after they heard rumors he is gay, and an Arkansas school district has informed a gay alum that he cannot speak at his alma mater's graduation.

A report in The Guardian states that eight European based footballers would like to come out but are afraid of negative reactions from fans. Back stateside, outspoken LGBT ally Chris Kluwe has been cut by the Minnesota Vikings and at least one report lists his activism as the reason for his departure. An all male "semi-strip" club may be coming to the iconic Bank of America building in San Francisco's Castro District. Also watch a pro-gay Illinois Republican face down anti-gay protesters.

Simon Cowell was charmed by a drag version of "La Vie en Rose" during a weekend edition of Britain's Got Talent. A group of famous gays got together to record a PSA that warns us against the dangers of anti-gay individuals. Mariah Carey's new and poorly named "#Beautiful" was released today and a male Justin Bieber fan rushed the stage last night in Dubai to hug get a hug from the teen.

This pit bull shows you can be vicious and stylish at the same time!