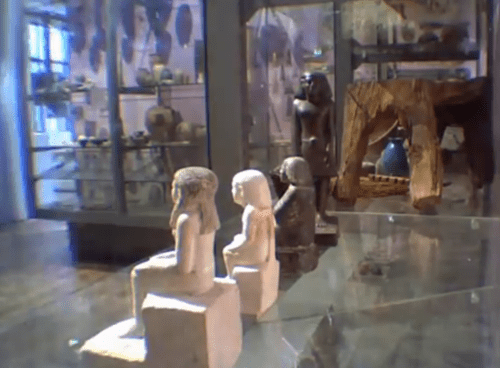 So, this is wild: a nearly 4000-year-old Egyptian statue in the collection of England's Manchester Museum has recently started to spin slowly in its display without any help from the outside world.  Gawker has the details:

A time-lapse video released by the museum shows the 4000-year-old relic of Neb-Senu slowly turning around inside its case without any apparent assistance from the outside world.

Found in a mummy's tomb some 80 years ago, the statue has been kept encased at the museum ever since.

Its current caretaker, Campbell Price, was the first one to notice the strange phenomenon, and says he first realized something was off when he found the statue askew, reset it, and then found it askew again the following day.

According to The Telegraph, British particle physicist Brian Cox–known for his frequent appearances on the BBC–thinks the statue's movement is being caused by differential friction.  Price isn't buying that theory, The Telegraph reports:

[Price] went on the cast doubt on Prof Cox's explanation: “Brian thinks it’s differential friction, where two surfaces – the serpentine stone of the statuette and glass shelf it is on – cause a subtle vibration which is making the statuette turn.

“But it has been on those surfaces since we have had it and it has never moved before. And why would it go around in a perfect circle?”

Price's explanation?  "In Ancient Egypt they believed that if the mummy is destroyed then the statuette can act as an alternative vessel for the spirit," he told the paper. "Maybe that is what is causing the movement."

Check out a time-lapse video of the spinning statue, AFTER THE JUMP…