The Washington Post droped a bombshell story this evening that nine leading U.S. internet companies including Microsoft, Yahoo, Google, Facebook, PalTalk, AOL, Skype, YouTube, and Apple are engaged with the NSA and the FBI in a classified program called PRISM established in 2007: 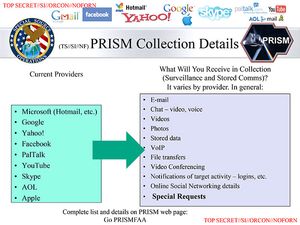 Firsthand experience with these systems, and horror at their capabilities, is what drove a career intelligence officer to provide PowerPoint slides about PRISM and supporting materials to The Washington Post in order to expose what he believes to be a gross intrusion on privacy. “They quite literally can watch your ideas form as you type,” the officer said.

The Silicon Valley operation works alongside a parallel program, code-named BLARNEY, that gathers up “metadata” — address packets, device signatures and the like — as it streams past choke points along the backbone of the Internet. BLARNEY’s top-secret program summary, set down alongside a cartoon insignia of a shamrock and a leprechaun hat, describes it as “an ongoing collection program that leverages IC [intelligence community] and commercial partnerships to gain access and exploit foreign intelligence obtained from global networks.”

But the PRISM program appears more nearly to resemble the most controversial of the warrantless surveillance orders issued by President George W. Bush after the al-Qaeda attacks of Sept. 11, 2001. Its history, in which President Obama presided over “exponential growth” in a program that candidate Obama criticized, shows how fundamentally surveillance law and practice have shifted away from individual suspicion in favor of systematic, mass collection techniques.

The Guardian reports that Apple, Google, and Facebook are denying participation or any knowledge of the program:

An Apple spokesman said: "We have never heard of PRISM. We do not provide any government agency with direct access to our servers and any agency requesting customer data must get a court order," he said.

Joe Sullivan, Facebook's chief security officer, said: "We do not provide any government organisation with direct access to Facebook servers. When Facebook is asked for data or information about specific individuals, we carefully scrutinise any such request for compliance with all applicable laws, and provide information only to the extent required by law."

A Google spokesman said: "Google cares deeply about the security of our users' data. We disclose user data to government in accordance with the law, and we review all such requests carefully. From time to time, people allege that we have created a government 'backdoor' into our systems, but Google does not have a 'back door' for the government to access private user data."

Previous Post: « Tom Emmer Sets His Sights On Michelle Bachmann’s Vacant Seat
Next Post: The New ‘Man of Steel’ Trailer is the Most Epic Yet: VIDEO »