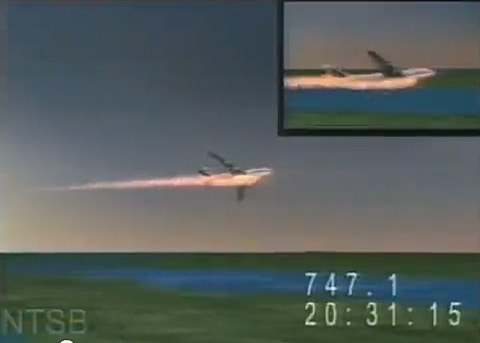 A new documentary revives the theory that a missile brought down TWA flight 800 off Long island in 1996, CBS News reports:

The six former investigators have been brought together for a documentary, "Flight 800," which will be shown on the EPIX cable network. They say the key piece of allegedly new evidence is in the form of radar analysis showing that there was a high velocity explosion, specifically that debris was ejected perpendicular and southward from the aircraft at MACH 4.

They filed a petition with the National Transportation Safety Board Wednesday morning. The NTSB did not give a time frame in which they will respond to the request, only saying it must be based on new evidence…

…Additionally, Hughes and others involved in the film said there were problems with the way eyewitness accounts were handled. They claimed hundreds of eyewitnesses reported seeing something that could only be a missile streaking through the sky towards the plane, but their accounts were discounted by the FBI and not taken into proper consideration when the NTSB held a hearing on the crash.

While those involved in the film said there was almost certainly a cover-up of evidence indicating an explosion, they were careful to not speculate as to who covered it up or why.

Watch the trailer for the documentary, AFTER THE JUMP…