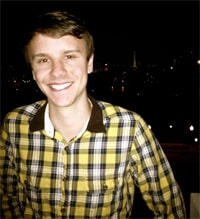 Kyler Geoffroy is a senior at The University of Texas at Austin pursing a double major in Government and Political Communications. During his undergraduate career, Kyler worked with the Texas Gay-Straight Alliance Network where he helped develop strategies and toolkits to help combat anti-LGBT bullying in public schools across the state. Recently, Kyler returned from a 4 month UT fellowship program in Washington D.C. where he worked at People For the American Way (PFAW) in their Political and Public Policy Department.  While in D.C., Kyler was able to attend the Presidential Inauguration ceremony, witness history in the making during the marriage equality Supreme Court cases, and was voted “Most Likely to Become a Presidential Speechwriter” by his fellow students. His career interests include writing, communication, and the distribution of information.