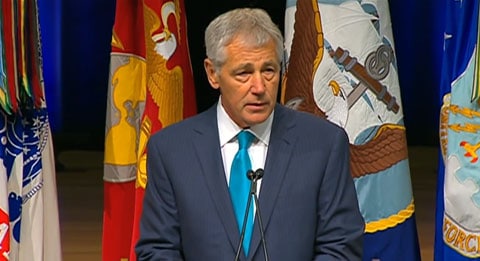 Secretary of Defense Chuck Hagel addressed LGBT service members at the Pentagon's LGBT Pride event yesterday in the first appearance at such an event by a sitting Defense Secretary.

Said Hagel in his remarks:

Our nation has always benefited from the service of gay and lesbian soldiers, sailors, airmen, and coast guardsmen, and Marines. Now they can serve openly, with full honor, integrity and respect. This makes our military and our nation stronger, much stronger. The Department of Defense is very proud of its contributions to our nation's security. We're very proud of everything the gay and lesbian community have contributed and continue to contribute. With their service, we are moving closer to fulfilling the country's founding vision, that all of us are created equal.

It has never been easy to square the words of our forefathers with the stark realities of history. But what makes America unique, what gives us strength is our ability to correct our course. Over more than two centuries, our democracy has shown that while it is imperfect, it can change, and it can change for the better.

All of us should take pride in the role the U.S. military has played in this endeavor and continues to play. The military continues to fulfill this country's promise. Our commitment to equality requires us to continue building a culture of respect for every member of the military, our society, and for all human beings.

In his second inaugural address, President Obama reminded us that, quote, "While freedom is a gift from God, it must be secured by his people here on Earth." Securing those freedoms has required generations of patriots to fight for their fellow citizens, and it has demanded courageous leaders be willing to stand up for what they believe.

"It was hard to imagine we’d ever be where we are today, but during these 20 years, the military’s gone through the difficult process of opening itself up by providing opportunities to those for whom it was previously denied or constrained, to women, to immigrants looking to prove their loyalty to this country and earn their citizenship, to gays and lesbians."