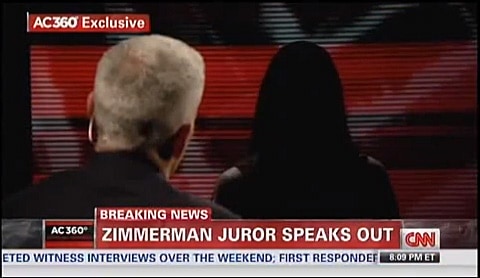 Last night Anderson Cooper sat down for an interview with Zimmerman Juror B37.

In part 1 they cover opening statements, which witnesses she thought were 'credible' (the defense medical examiner), and which  she found not credible (Rachel Jeantel, Trayvon Martin's friend), what it was like day-to-day on the jury, the 911 tapes (she insists it was Zimmerman's voice on the call).

In part 2 he asks what she thought of George Zimmerman, whether she thinks he should have been carrying a gun, and the videotapes in which Zimmerman walked through a reenactment. The juror says she believes Zimmerman thought his life was in danger, and believes Trayvon Martin threw the first punch. She says she felt that both sets of parents said anything a parent would say. She also says she doesn't think race played a role in the case, and it wasn't part of the discussion in the jury room.

The juror had announced she was writing a book about the case, but after hours of outrage on social media for Sharlene Martin of Martin Literary Management LLC to drop the juror, it was announced that a book deal was no longer in the works, via a statement published by Buzzfeed:

“I realize it was necessary for our jury to be sequestered in order to protest our verdict from unfair outside influence, but that isolation shielded me from the depth of pain that exists among the general public over every aspect of this case. The potential book was always intended to be a respectful observation of the trial from my and my husband’s perspectives solely and it was to be an observation that our ‘system’ of justice can get so complicated that it creates a conflict with our ‘spirit’ of justice.

Now that I am returned to my family and to society in general, I have realized that the best direction for me to go is away from writing any sort of book and return instead to my life as it was before I was called to sit on this jury.”