A coalition of gay rights advocates and organizations in Florida have made it clear that they have no plans to introduce same-sex marriage on the state ballot anytime soon. Instead, they are looking to a future U.S. Supreme Court case as the likely method of settling the issue for the state, The Miami Herald reports: 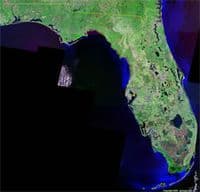 "I don't want to build up any false expectations that it would be good to run back to the ballot right now, or that it would be good to think that we should file a lawsuit anytime until the hearts and minds change more and the environment changes a bit more," said [ACLU of Florida's Howard] Simon, whose organization has joined with three major gay- rights groups to coordinate strategy for securing gay marriage in Florida

It's unlikely that Florida's 2008 Amendment 2, which defined marriage as between a man and a woman, could be overturned at this time in the state, said Nadine Smith, Equality Florida's executive director.

Recent polling in Florida shows about 54 percent of voters now support gay marriage. It would take 60 percent plus one vote to repeal the gay ban.

People have to be realistic," Simon said. "We have a high hurdle to jump over in Florida, which is the 60 percent rule."

The ACLU and other groups believe that Florida will get full gay-marriage equality when the rest of the U.S. gets it.

"The ACLU is working now to secure the equal right to marry nationwide by following up our U.S. Supreme Court victory in the Windsor case with lawsuits in Pennsylvania, Virginia, and North Carolina," Simon told the Miami Herald.

"An extensive analysis of the national landscape make it clear that, given the political environment in Florida, including the decidedly un-progressive state of our federal appeals court, we are more likely to secure the right to marry for Florida's same-sex couples from victories in other states than by initiating either a lawsuit or a referendum in Florida."

In the meantime, Equality Florida and the national Freedom to Marry have launched an educational campaign, "Get Engaged," with the goal of increasing support for marriage equality in the state.