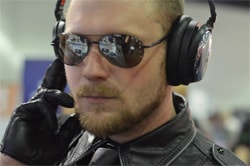 Christian is a professional copy writer and blogger in the San Francisco Bay Area. Originally from Texas, he moved to Monterey, CA in 2004 and then to San Francisco in 2009 and currently resides in El Cerrito. He holds a degree in English with a focus on literature and culture, and his professional career has included working for Sega of America as a QA tester on over half a dozen shipped titles, and for Trion Worlds as a copy writer for their flagship title “RIFT.” In addition to blogging for Towleroad, he has been a pro bono writer for GayGamer.net for several years, previously under the handle “Digital Lit.” He is very active in the San Francisco gay community, which includes involvement with the Leathermen’s Discussion Group and singing with the San Francisco Gay Men’s Chorus.