Pastor Bill Devlin "failed to sign in with an officer" at the Harrisburg office of Pennsylvania Attorney General Kathleen Kane and was found attempting to reach her upstairs office yesterday, when he was confronted by Capitol Police, the Philadelphia Daily News reports: 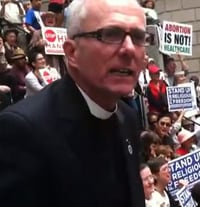 When officers confronted Devlin, he laid down in an elevator with the door open and refused to move. "The police asked him to get up, he did not, so they handcuffed him and they carried him out of the building," Lubart said.

Devlin, an activist who has, among other things, gone on a hunger strike to protest the church ban in NYC schools, was trying to reach Kane to confront her about the announcement she made this week:

The pastor said he was moved to travel to Harrisburg to pray that "God would soften [Kane's] heart" after the A.G. announced earlier this week that she would not defend Pennsylvania's ban on same-sex marriage. The law is being challenged in a federal lawsuit filed on behalf of 23 state residents by the American Civil Liberties Union.

Devlin faces a disorderly conduct charge and a fine of $50 to $300.

Kane's announcement, if you missed it, AFTER THE JUMP… 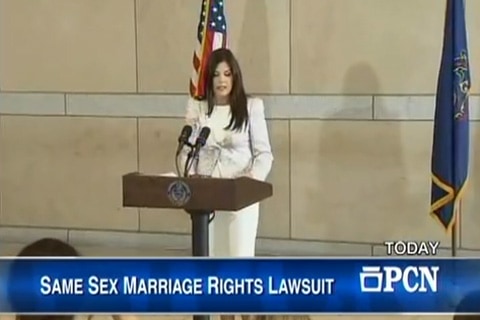