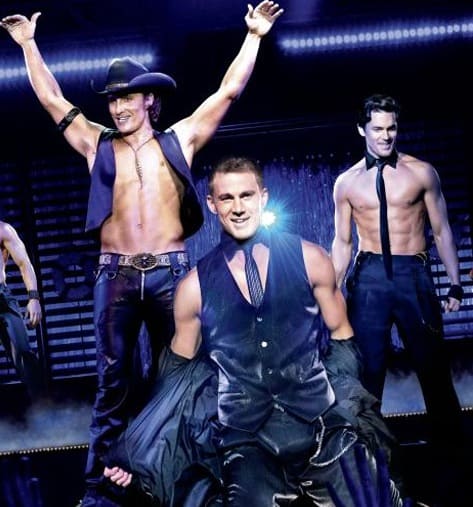 Deadline Hollywood has the details:

The creative team is in place to turn the hit stripper film into Magic Mike, The Musical on Broadway. The producers have set Tom Kitt and Brian Yorkey to write the songs, and Roberto Aguirre-Sacasa to write the book, based on the Steven Soderbergh-directed film that was informed by Channing Tatum‘s early days as a male stripper. They’ve gotten top-shelf talent.

Kitt and Yorkey are the creators of the Tony- and Pulitzer-winning Next To Normal, and the upcoming If/Then, starring Idina Menzel. Aguirre-Sacasa recently co-wrote the book for Spider Man: Turn Off The Dark and helped turn things around when there was nothing but bad news on that musical and performers were dropping like flies from the complicated rigging. Aguirre-Sacasa also has written the book of the upcoming American Psycho Musical that Duncan Sheik that will premiere in London later this year.

Magic Mike, The Musical is being produced by Soderbergh, Tatum, Reid Carolin, Gregory Jacobs, and Nick Wechsler. The show was put together by WME. The group is fast tracking the project to the stage while also prepping starting the ball rolling on a sequel to the 2012 Magic Mike film.

No word on a release date for the sequel to the film, which Tatum has said will be "bigger" than the first film, and which he might direct himself.